Did you see the great story by Reuters, “The Toll“? This is exactly how our data is supposed to work. We collect the data, and other news outlets move it forward, “How Reuters tracked fatalities and Taser incidents,” We don’t even ask them to give us credit, but we’re glad when they do. 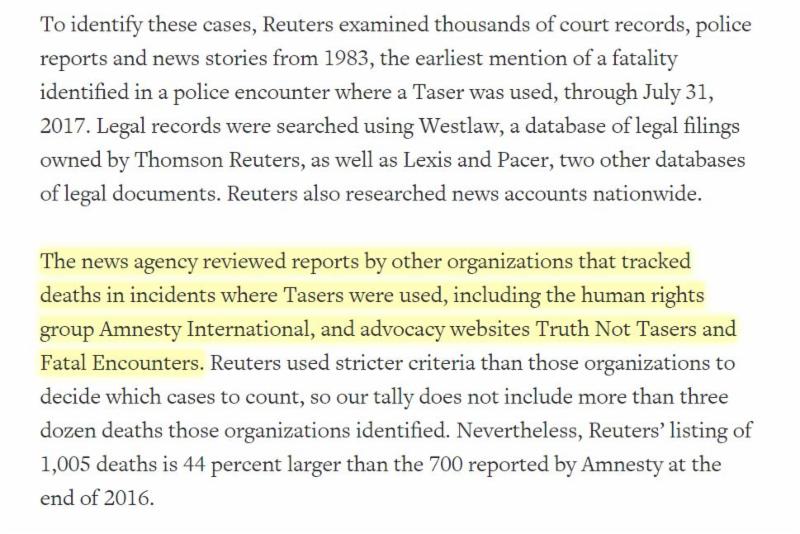 The Reuters story  illustrates something I’ve been thinking for a while. When people react in anger regarding deadly police violence, they tend to look at those outrageous videos, like the ones that showed the unconscionable killings of Philando Castile, Kelly Thomas or James Boyd. I’ve seen so many of those videos while doing the research, I’ve actually become desensitized to them. I think a lot of Americans feel that way, and it contributes to fatigue.
But I’m going to ask you to step outside of your understanding of deadly police violence for a second. Maybe if you’ll just ask yourself a question, you’ll see what I mean. Why do I care about people being killed by police? I know there are a million answers to this question, but I think they all boil down to one key idea: It offends our sense of justice.
This is a country that is supposed to have a system of laws and justice. When a cop kills somebody, sans  a court of law, we understand that our entire system of democracy has been undermined. I’m not saying police should never kill anyone–although many Fatal Encounters supporters would say that–but I’ve researched too many instances of men and women police getting ambushed or fired upon without warning for a simple traffic stop to be that simplistic in my thinking.
Can we agree that fewer people killed would be better? Can we agree that we would prefer fewer police to act in the role of judge, jury and executioner? There is an entire category where the officer was put in those roles and decided that the person was not a significant risk to the officer or others, and then went right ahead and killed them without meaning to.
Stun guns–the brand Taser is familiar–were adopted by police departments across the nation to give police an option not to kill people, to decrease deaths. Out of our 21,944 deaths, we have 743 people in the database who were killed by stun gun, or whose death involved a stun gun. We’re the only publicly available data on whether stun guns actually decreased the numbers of deaths, as police and other citizens were promised when agencies were spending millions on the devices. Guess what? Our data is preliminary–we’ve got another 60 cases we’re currently researching–but it suggests that stun guns didn’t decrease deaths, they increased deaths. That’s because in situations where police chose deadly force prior to stun guns, they still go for their guns. But in situations where police would previously have used a physical or chemical means to incapacitate or restrain a person–unarmed or lightly armed people, people on drugs, mentally ill people–they’re using stun guns, and people are dying.
Arrest-related deaths by stun gun was never available for public scrutiny on a national level before Fatal Encounters. It’s still not available from other sources like the Washington Post or the Justice Department or even Reuters. But on Fatal Encounters, it’s pretty easy to see  some patterns. For example, the racial data is telling. African-American/Black: 214 deaths; Asian/Pacific Islander: 5 deaths; European-American/White: 176 deaths; Hispanic/Latino: 80 deaths; Native American/Alaskan: 7 deaths; Race unspecified: 261 deaths.
This is horrific on several levels. First, the officer made a thoughtful decision not to kill or injure someone, and then killed them. Can you imagine how emotionally damaging that would be? These types of deaths often happen in front of family members. Again, a lifetime of horror for those left still breathing.
Reuters has once again proven what Fatal Encounters has been saying for years: More data helps people make better decisions. Won’t you contribute today?
Thank you,
D. Brian Burghart
Executive Director, fatalencounters.org
Click here to go to our IndieGogo fundraising campaign!

On fatigue and government sleight of hand

Life and Death in Draft Form