Wow, that’s pretty hilarious. I just realized I never posted the final piece of the newspaper’s series. It ran on December 31, 2014. (Yes, I know it says January 1 on the website, but the newspaper came out on December 31 because of the holiday, and our website is too stupid to update.)

I write in the third person when I want news articles to sound credible. This year, I’ve written the first five installments in the Fatal Encouters series—our look at officer-involved homicides—in the third person. It’s the way “respectable” straight journalists write in the national media. It’s the way journalism academics teach students to write. (I once had a master’s level instructor tell me that first-person narratives are forbidden in the AP Stylebook.) When we read or hear the third person voice, our brains are conditioned to react in a certain way.

One problem with third-person reporting is, I don’t write for a national audience, and I don’t much care whether people outside the McCarran Loop find me credible. I’ve been an alternative journalist at this paper for more than 20 years, and people around here either think I have integrity or they don’t.

Another problem is that the bureaucrats we journalists cover know how to manipulate media outlets who use this style of reporting. They just say nothing or they make an incredible assertion, so the journalist either doesn’t use the quote, types it like a stenographer, or finds a contradicting voice. The fact is the last option is the best, but journalists work on deadline. In many news outlets, not getting a second side on the record—even if they’re the reticent ones—is enough to quell an article.

For the rest of the story, visit the Reno News & Review site

The two infographics on this page show the difference in federal reporting of officer-involved deaths. The top chart shows the statistics compiled by the Bureau of Justice Statistics, regarding Arrest-Related Deaths, available at www.bjs.gov/index.cfm?ty=dcdetail&iid=243, which include “records of all deaths occurring during the process of arrest. Data are collected directly from state and local law enforcement agencies.”

The bottom graph is accrued data released by the Department of Justice with the Uniform Crime Report’s Expanded Homicide Data, http://1.usa.gov/1wscWMb, which purports to show the killing of a felon by a law enforcement officer in the line of duty. Large jurisdictions, including the state of Florida, have not contributed to this dataset, and yet national news organizations report the numbers as though they’re comprehensive enough to draw conclusions from.

The assumption would be that the bottom graphic would be a subset of the top graphic. That assumption would be erroneous, and neither chart is accurate or comprehensive. What both graphics show, though, is that the Death in Custody Reporting Act had little-to-no effect on the reporting of statistics. 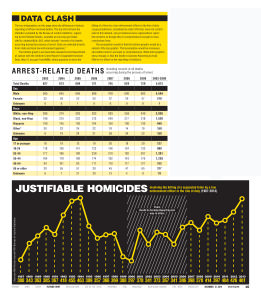